Showing posts from October, 2020
Show All

- October 07, 2020
ROYAL CANIN | Norwegian Forest Cat from Franck Allera on Vimeo . The interesting aspect of this video is that this pet food manufacturer has tailor made a dry cat food for a specific breed. I think that is very adventurous of them because, to be perfectly honest, I am not sure that it is possible to differentiate this breed from another in terms of nutrition. There may be something there but certainly the Norwegian Forest cat does not require nutrition which is different to that which you would give to a Maine Coon cat, for instance. If a cat breed is very different such as a hairless cat there might be a decent argument to provide a specific diet to that cat for a specific reason because of their hairlessness but you would need an big difference like that to argue your case.
Post a Comment
Read more

It's not particularly cheap and it is designed to look like a luxury item so this interesting cat products will not appeal to everyone but it does appeal to me, although I don't have one. I just think it's worth promoting a little bit because we know how cats love the top of their head to be massaged. I use a flea comb around my cat's head and the sides of his face and neck. He also loves it when I do it quite firmly, but not too firmly, on the top of his head.  It works bit like this cat massager in the way it stimulates him and calms him. And I think one aspect of this device which I like is that it may help to relax and anxious cat. Humans know how relaxing it is to have a scalp massage. And we all like to know how to relax anxious cats. In addition to that it means you are interacting in the nicest possible way with your domestic cat companion which is beneficial for both of you. That said, the device is a bit extravagant because you can probably get the same eff
Post a Comment
Read more 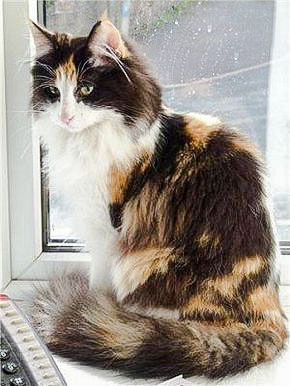 This is a pretty Norwegian Forest cat and she is a tortoiseshell-and-white which in America is called a "calico" cat. They are almost always female; in exactly the same percentage as tortoiseshell cats. The coat is a mixture of black, red and cream and white coloration. It is a black coat plus orange tabby. The lighter, orange tabby areas, being two-toned give the impression that the cat has a three-coloured coat. Male tortoiseshell cats are sterile. They are incredibly rare and about one in every 3,000 which on the face of it makes them valuable but their sterility undermines this value. I reckon that they could be worth about £2000 for their rarity value alone but Sarah Hartwell, a colleague of mine, disagrees with me. Calico Norwegian Forest cat. Photo: in public domain Theoretically, make tortoiseshell cats should not exist but they due because occasionally there is a minor genetic error. The trouble is that his masculinity is poor. As mentioned they are sterile and th
Post a Comment
Read more

The nice thing about this video is that you get a chance to see a lot of Norwegian Forest cats together and these individuals should comply fairly accurately with the breed standard (as they are show cats) and therefore they should be typical in appearance of this cat breed. Note: I don't like the music. Too grand. This is a cat show not a royal marriage or procession. I think that's quite important because quite a lot of the time on the internet you will see a cat described as a Norwegian Forest cat but the individual may be a rather poor example of the breed in that they don't comply with the breed standard. I think people need to know what this breed looks like.  Also, on the internet you will get a lot of people mis-describing their cat or they believe that their cat is a Norwegian Forest cat and it may in fact they may be a hybrid. One person commented on this video saying that the cats are being harmed. That's an exaggeration but a lot of people don't like
Post a Comment
Read more

The owner of this Norwegian Forest cat (NFC) tells us that it is rare for this individual cat to squeak. Let's just say it's another form of vocalisation of a domestic cat and it is certainly very cute.The NFC comes in a very wide range of coat types under the breed standard. Perhaps the best coat type for this breed is the tabby-and-white because it has a natural look about it. Or a full tabby NFC looks great too. But here we have a black-and-white NFC (tuxedo in fact) and I think she's female. The owner and video maker implies that NFCs are very quiet. And therefore the squeak or any form of vocalisation is rare. I'm not sure she is correct. Correction: she is correct! NFCs are said to be "usually very quiet, so it may be difficult to know when the female is in season". This quote comes from Gloria Stephens in her book "Legacy of the Cat". Perhaps a more interesting aspect of this video is how this sweet cat is provoked into kneading the duvet b
Post a Comment
Read more

It is unusual enough to take any cat on a hike but to take 2 Norwegian Forest cats is rare indeed. This pair of Norwegian Forest cats look very typical of this breed. They are gorgeous and they look entirely at home in the forest. Visually they look wonderful next to the streams and the trees of the forest. It's not Norway but it is a very good substitute. I always love to see domestic cats on leashes walking down trails as we see in this video. This is Albert and Apollo's first hike to Clearwater and Watson falls in Oregon, USA. Screenshot from the video. Classic NFC profile.
Post a Comment
Location: Watson Falls, Oregon 97447, USA
Read more

Female domestic and feral cats cats spray urine for the same reason that males do it. It's like a calling card to say that they were there. It sends a signal to other cat that this is their home range and when they were at the spot where they sprayed. Perhaps people think that it is only male cats who spray their home range. This is not true. In feral cat colonies, adult cats spray urine more frequently than females. So, for example, in a colony of barn cats, females would spray urine while travelling but not at the same high rates recorded for males. Females spray at higher rates just prior to oestrus which ensures the presence of a male cat at an appropriate time. A survey in Sweden tells us that dominant males spray at rate of 22 marks per hour compared to 12.9 urination is per hour for sub-dominant males. Faeces deposited for the same reason i.e. as a scent marker were always covered in core areas but outside of those areas they were frequently left uncovered. Female farm cats
Post a Comment
Location: Asia
Read more

What I like about this video is that we see a couple of Norwegian Forest cats living a normal life in a British garden. We are not looking at beautifully photographed Norwegian Forest show cats in a photographic studio. We are seeing them play in day-to-day life. It gives us a different perspective and reminds us that they are, at the end of the day, domestic cats albeit a little bit more glamorous than your average moggy. These are both tabby cats, one is a ginger-and-white and the other is a grey tabby. I don't know whether they are confined to the garden. The garden does not have a fence around it but a nice high wall which may help to keep them in. Although the ginger tabby climbs to the top of the wall which indicates that he explores outside the garden. This is something that would worry me because they are such handsome cats and therefore more liable to be stolen. You see the cats in 2005. This is now is 15 years later. I would expect both these cats to have passed over t
Post a Comment
Location: United Kingdom
Read more 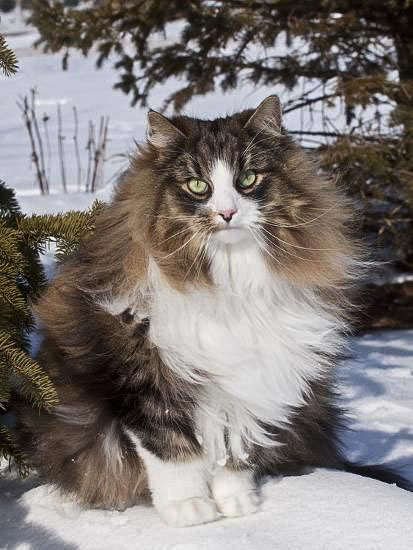 This is a stunning Norwegian Forest cat. She is a brown tabby-and-white which is perfect for the forest. The white fur looks like the snow and the brown mirrors the tree trunks. For me the feature which distinguishes the NFC from the Maine Coon and the Siberian is the muzzle. It is quite triagular and pointed in the NFC compared to the other two breeds. This is why the nickname for this breed is "Wegi" or "Wegie" i.e. a wedge shaped muzzle. If you go to Norway today you'll see the genuine article in homes. They'll be moggies and longhaired. It is just that in about 1930 Norwegians became interested in planned breeding so the breed was recreated as it was first created in 1912 with the first named NFC a male called Gabriel Scott Solvfaks. There was a quite spell between 1912 and 1930 when the breed was dormant. The bottom line is that the breeders got involved in the 1930s and line breeding began in earnest. This would have refined the moggies in the breed
Post a Comment
Read more 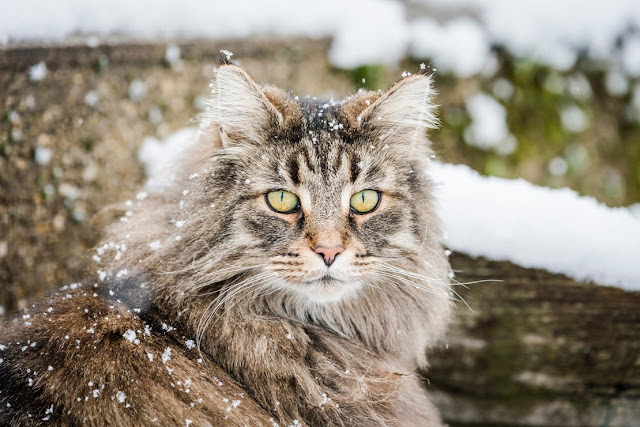 Norwegian Forest cats (NFCs) don't like water any more than any other cat. Neither do they like water any more than any other. The question really refers to individual cats and not to a breed of cat. I don't think the fact that the NFC comes from snowy Norway makes a difference in this discussion. There's probably a bit of a myth on the Internet about domestic cats and water in any case. There is a myth that Turkish Van cats like water. It is not true. In general, all domestic cats are slightly averse to water because their wildcat ancestor didn't really live around watercourses or rivers or streams. They lived in scrubby dry and slightly arid landscapes. This history has been brought forward to the present in the DNA of domestic cats. They don't drink water that well because they learned over eons of evolution that water is scarce and therefore the learned to take their water from their prey animals. The Norwegian Forest cat is no different to a random cat in Scotl
Post a Comment
Read more
More posts